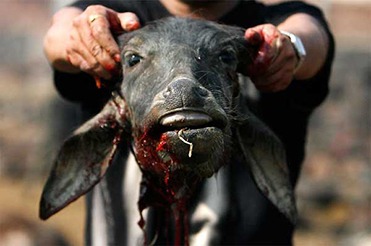 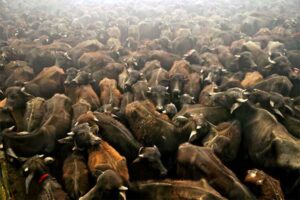 It was the 8th day of Lunar Calendar yesterday, a holy day related to Medicine Buddha. If you killed one animal or caused the death of one animal, the negative effect would be multiplied by 100,000 times. Yet unfortunately the day fell in the period of the Hindu festival of Dashain, the most important festival of the Nepalese Hindu calendar, commemorating the great victory of the evil demons known as the Battle of Ramayan, won by Lord Ram through the intervention of the goddess Durga. It is often depicted as slaying the terrible demon Mahisasura, that terrorized the earth in the guise of a buffalo. According to tradition, during the 15 days of Dashain hundreds of animals are sacrificed at every temple to pay homage to the goddess, but also to prevent further destructive wrath. The blood of buffaloes, oxen, sheep, goats, birds is poured down the stairs of the religious buildings. The sacrifices will last for the duration of the festival, and transform the pavement around the temples in huge pools of blood.

Yesterday was such a horrible day to do such a cruel thing. It was such a great opportunity to perform good deeds, but in the name of religion, for thousands of years, this had become the specific time to kill. How can we be happy if we bring such great suffering to others? Not only me, many of the people like me who have a bit of heart and love towards animals and other living beings are trying our best to use yesterday to do something beneficial. To kill in the name of true spirituality is the worst thing that one can do to others and oneself. I hope this kind of cruel deeds can be terminated by the genuine understanding of cruelty, pain and suffering. 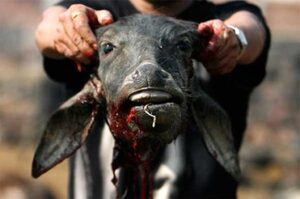 Personally, I have been praying for many decades. Although I think there is a movement going against this unreasonable cruelty, these people are very weak and those people who are encouraging the slaughtering of animals in the name of religion are very strong and powerful. In Europe, hunters have formed many strong unions that even government has no power over them. It is similar over here. The slaughterers are very strong and powerful, we cannot do anything. I have to wait for my prayers to be answered.

When I was giving a talk yesterday, I bursted into tears, I couldn’t continue teaching even though I tried my best. I could not talk any more. The talk was terminated prematurely. Anyway, I had to stop and just sadly and helplessly pray for the poor beings, the poor slaughterers and everyone who has been involved in this cruel activity. What rights do we have to take away the lives of others? Everytime I visit foreign countries, whenever I see those animals in the water tanks waiting to be slaughtered, whenever I see people enjoying fresh lobsters, crabs, fish, raw meat, and whenever I try to buy these animals from the cold hearted restaurant owners who often reject my offer because of knowing I am going to release these poor things, I really feel very helpless. For thousands and thousands of years, we have been coming back to share our love and understanding, yet people are so blinded by temporary enjoyment of making others suffer, taking away others’ lives, eating their meat and doing all sorts of nonsense in the name of love, in the name of religion, in the name of delicacies and even in the name of offering to Gurus and deities. Sometimes when I think very deeply, I feel that there is almost no point to waste our time here, if people don’t change, especially if my students and friends do not improve. What’s the point?

We have to understand and keep reminding ourselves that if you bring suffering to others through taking their lives, through talking nonsense, through doing everything with only concerns of your own ego and your own emotions, there will not be any positive results. Causing suffering and pain to others will only bring you suffering and pain. If you want happiness, you have to bring happiness to others and you have to have an open heart. Otherwise, you are really not practising spirituality, you are indulging in the play of your own ego and your own drama. Ask yourself, are you practising Dharma or playing drama? If you are playing drama, stop now and immediately!

I tried my best to take my mind out of it, laughing and smiling to the people, so that I can look better, rather than crying and looking horrible on the throne. My ego doesn’t like me to look bad. I was wiping the tears from my eyes, many sticky things were coming out of my nose, as if i was having a flu. Thousands and millions of animals are being sacrificed every year in Nepal, and millions and billions of animals are killed every day to feed our stomachs as though we cannot survive without eating meat. But no one has the guts to even show a little sad face. The saddest thing for me is many of the cruelty are done in the name of religion. If it is for enjoyment or for something else, we can blame on ignorance or ego. In the name of wisdom and spiritual religion, why can’t we expect anything other than cruelty? No, we cannot. I hope you guys are not thinking that I am pessimistic, I have no choice. Since one of the greatest religions is doing this sort of things, it really makes the future look hopeless. Whenever I think of it, tears come out of my eyes. This did not happen only yesterday, I have been suffering since childhood, with no solution whatsoever, except crying and praying. I have been trying my best to buy the goats and animals to be taken slaughterhouse, but I can only do so much. I have very limited resources, I have only so much money to save them and so much land to keep them. What can I do? I can only cry and pray.

Since yesterday we have been doing big poojas, today again we are doing big poojas. Now that we have completed poojas for my beloved guru, we started prayers for these tragic killings. I know no one can ever say that this is a disaster, but try to think one day if some bigger and more powerful beings from other planets come and because their religions say that human sacrifices is a great way to accumulate merit and remove obstacles, how would we feel? If one day, they say that human flesh is delicious and that they should make human sushi, how would we feel? What if they say that deep fried human flesh or fresh human flesh is very delicious, how would we feel? We as Bodhisattvayana followers and practitioners have to pray, make aspirations and push for the full abandoning of slaughtering lives of other beings, we have to pray and act for lives and lives to come. Until Great Liberation, we promise that we will never reverse our aspirations! 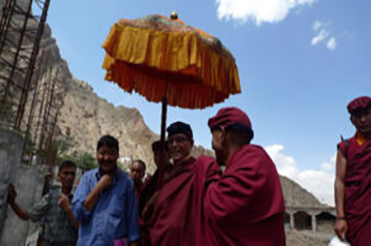 [caption id="attachment_1208" align="alignleft" width="300"] Inspecting the monks school at Hemis[/caption] Internet connection has been extremely good at Hemis, unheard of since history of Hemis started. I am quite proud to... 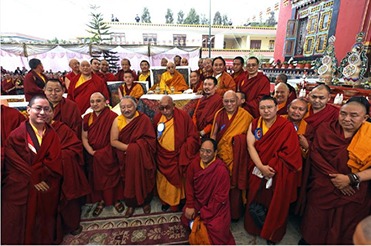 My Guru has just left. We just completed 49 days of prayers and practice for him. I was thinking how it would have been if he is still around. If... 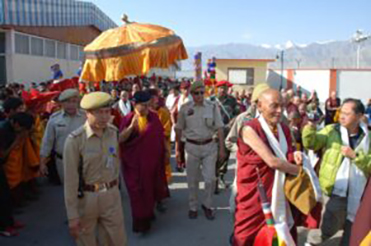 [caption id="attachment_1205" align="alignleft" width="300"] Warm reception at airport[/caption] As you all know, I am back in Hemis, the holy monastery that I spent many years since age of 7 or... 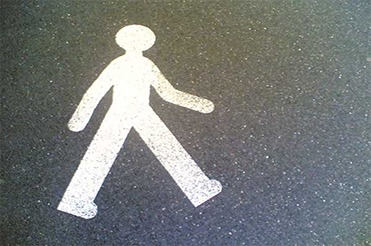 As we prepare ourselves for the forthcoming Pad Yatra, we are also preparing ourselves for a great time and excitement ahead. I am always thrilled whenever I think about being... 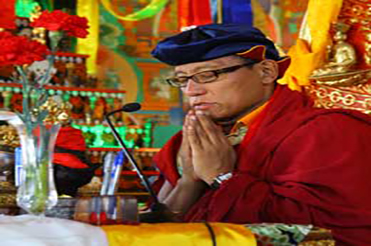 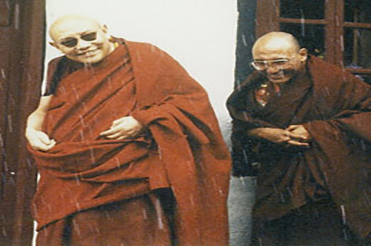 From The Depth Of My Heart

[caption id="attachment_1198" align="alignleft" width="300"] Meeting my Guru at his monastery in 1990, when the snow and rain came to give a warm and auspicious welcome[/caption]  Whether one believes it or... 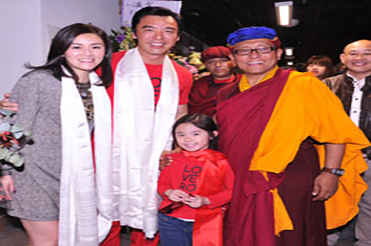 I Wish I’m Not A Buddhist

I had a wonderful time in Hong Kong recently, spending with my old and new friends. They are known as the Wynners, some said that they are regarded as the... 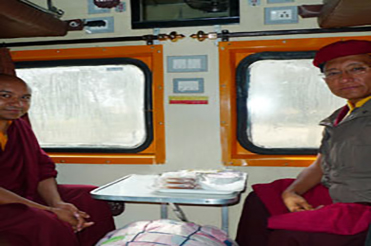 Slow Down for Clearer Vision

If you can remember, during the Pad Yatra in 2009, I started a "Turtle Club" for a group of my friends and students who could not walk as fast as... 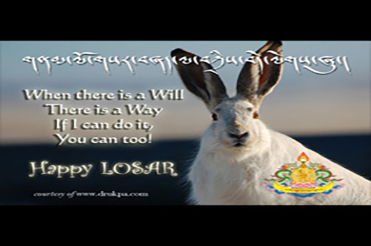 I have just arrived in Darjeeling after visiting Kyabje Kalu Rinpoche's monastery in Mirik. As you all must be knowing by now, I love to drop by my friends' places... 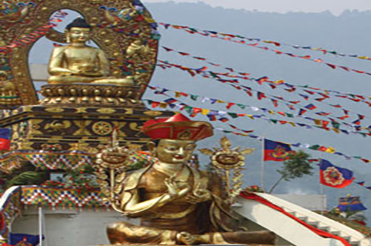 Good Life, Bad Life, The Choice Is Yours

Because of impermanence, the Grand Wang or Initiation is finishing. In a way it's very good, as this great spiritual gathering has been very successful. So one thing in our... 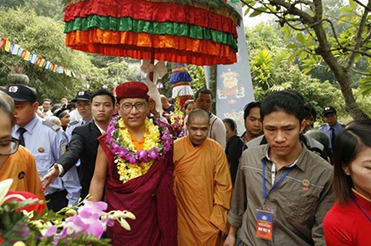 Happiness Because of Harmony and Understanding

It's almost a week since we arrived in Vietnam. I have always wondered how Drukpa Vietnam in such a short time is able to organise such large scale event for the lineage, whereas... 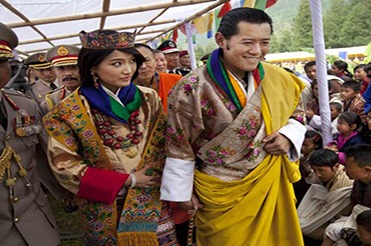 Practice Has To Be Practical

If you notice, most of the so-called practitioners always practise and do virtuous deeds on special days. Well, I am no exception. We say that effects are multiplied by hundred...