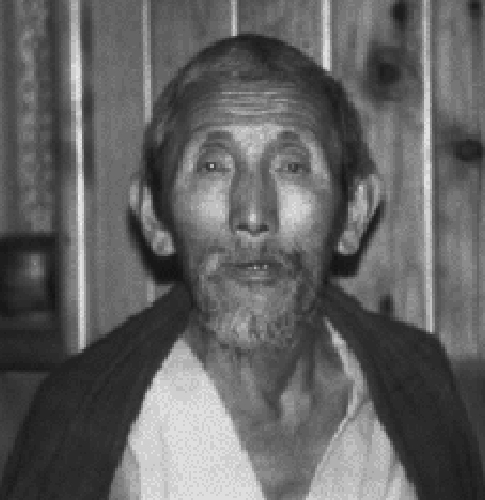 The great yogi, Gen Khyentse Gyatso, is a renowned Mahamudra guru. I could not manage to assemble his biography in detail at this time, but meanwhile, I would love to share with you guys some of my brilliant experiences I had with him. Even playing with him in those beautiful, old days did give me much enlightenment. His astonishing gift was just unbelievable.

He was basically from my main seat, Druk Sangag Choeling, in southern Tibet and the son of a most important personal assistant to the 10th Gyalwang Drukpa. It is no wonder he was given the name LOVING WISDOM by the 10th Drukpa. He completed his common monastic education miraculously. He had a magnificent way of learning things so easily, a way which no common person could comprehend. According to some of our old monks, Khyentse, as a young novice, was already constantly in meditation while he was going through all these learning processes. Not like many of us who need to put a lot of mundane intellectual effort into learning things. I believe that he was discovering and getting this common education through his indestructible meditative state of consciousness. However, after his graduation, he served as the General Secretary to the Ministry of Administration for many years, and also he was the most important and most loved example for the entire community of both lay people and monks, even though he was in his teens. However, after he accomplished some of his mundane activities for the sake of the common people who were there in his presence, Khyentse left for continuous retreat under the guidance of the great master Tripon Pema Chogyel, with no attachment to any of his fame or adoration within the society. He served his master with his full-hearted practice of Mahamudra. After Great Master Tripon Pema Chogyel’s parinirvana, he continued his retreat under the guidance of the great realised master Apo Rinpoche, who was the grandson of Mahasiddha Shakya Shri.

When I say “retreat,” in his case it is really a complete form of retreat for 24hours a day and 12 months a year. Unlike most of us, Khyentse’s mind of luminosity in Mahamudra is extraordinarily fantastic, no matter what he is doing, wherever he is, never getting distracted from the meditative state of the mind, yet relative communication with everybody can still be held so effectively and warmly. I know it is not meant to be judged by someone like me, but as I had several opportunities to be around him and receive many of the transmissions of Mahamudra, lately I cannot stop thinking about him and admiring his profound radiating eyes that are resting totally in their own nature (Mahamudra) as they were when he was involved in all of his activities of Dharma teachings and common conversations, etc. Not like many of us, who have great difficulty in uniting one’s own activities and the practice simultaneously. He was always available for people around him with all his sense of humour, due to his infinite kindness and compassion.

When I was 14, I had a golden opportunity to be with him a few times and he used to be the most beloved one to me, mainly because he always came up with lots of ideas to make me laugh endlessly. Not only that, he could perform all the miracles such as hiding items that were in my hand a second before, or sometimes asking me to go to the next room to do whatever I would like to do, but when I came back, he would tell me exactly what I did there as if he were with me. Also, he could always predict the weather accurately for the forthcoming days while we bet, humorously, not seriously. When I asked him how he did those things and how he knew those things, he always said, “Well, that’s just a trick that I learned back in my childhood,” and smiled. I guess I was a bit dumb; I believed and took it as he said. Lately, when I think back, it all convinced me in that it was a purely divine performance, along with his loving kindness and entertaining humility for me. Well, these are part of my limited experiences. I feel sad when I write these things because when the precious masters were so kind to make themselves available for us to see, touch, communicate with and hear the teachings, even through leisure time with joking, playing, and so forth constantly guiding us, we did not appreciate their love and the divine messages until later.

As all other masters, after he benefitted numerous people throughout the Himalayan regions by his divine teachings on mind and Mahamudra, he left all of us behind and did dissolve into his own great nature, Nirvana.