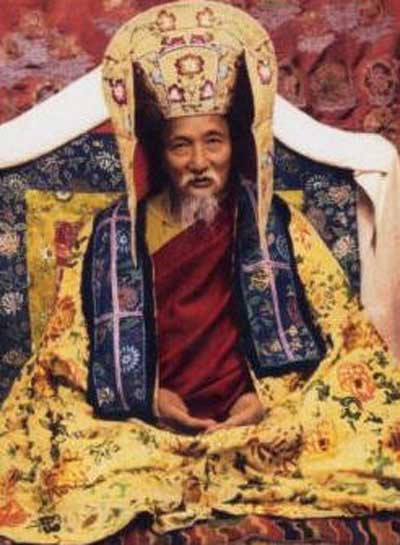 My first guru, Thuksey Rinpoche (1916-1983), Ngawang Gyurmed Pelsang, was born in 1916, as the son of the 10th Gyalwang Drukpa and the grandson of Mahasiddha Shakya Shri. Thuksey Rinpoche in Tibetan language actually means ‘The Precious Heart Son,’ in that ‘Son’ not only postulates the biological essence of great enlightenment but also the wisdom of its own nature. Many of the holy masters, and especially the 13th Dalai Lama, declared that this small child was indeed the Speech Incarnation of Taklung Ma Rinpoche, the Head of the Taklung Kagyud School. However, his father, the 10th Gyalwang Drukpa, refused to give his son away to the Taklung order because he intuitively knew that his son would become a guardian and benefactor of the teachings of Buddha for the whole world, and particularly the teachings of the Drukpa Lineage when it would suffer under the revolution that would take place in the future. Instead, he was given to Ngawang Tenzin Pelzang, the 7th Zigar Choktrul Rinpoche, to become adopted when he was little more than an infant. He resided for most of his younger days at Zigar Gonpa in eastern Tibet.

Having trained and studied under the guidance of his own father and many other high lamas, such as Zigar Choktrul Rinpoche, who was what he called ‘the main refuge’, he also included among his teachers his Mahamaudra guru, Tripon Pema Chogyal, Drukpa Yongdzin Rinpoche, Togden Pagsam Gyatso, Thuchen Choegon Rinpoche and Lobpon Sonam Zangpo. My guru, the 1st Thuksey Rinpoche, was very serious and disciplined with his practice throughout his younger years. He said that during his time at Zigar Gonpa, after receiving all the yogic transmissions of blessings and teachings from his main spiritual master, the great living Buddha Tripon Pema Chogyal in central Tibet, he never passed even a day without accomplishing four sets of yoga practice even when he was very occupied with activities such as the setting up of the Educational Institute for Higher Studies or the disciplining of the monastic community. Also, he pointed out to me how important it was for him to remain in the meditative state of consciousness in the stream of his Guru’s precious instructions throughout the day and night. Placed on top of the great view of Mahamudra, I think his main practice was the Six Yogas of Naropa, though you can never be sure what these holy masters’ practices are, because the genuine practices are actually meant to be humbly and secretly practiced. It is not like many of us who are always busy talking about our practices, what we did in the past and what we are planning for the future. I was told by many old monks of Zigar Gonpa that most of his life was spent in continuous retreat doing practices with not much sleep and the other things that we normally may do to kill our precious time. I heard him saying once that he could see clearly the white bone of his leg where both legs had touched in the continuous assumption of the vajra sitting posture. However, he elaborated no further, therefore I presumed that he must have spent his entire time in meditation, not only in his state of mind, but physically as well. He wore a thin cotton shawl all year long, even in the winter when the temperature dropped to around minus 10 degrees celcius, or even lower. He never considered to make his hermitage warmer or wear more clothes. Everybody witnessed that within an approximate two-metre radius around the hermitage where he stayed, no snow or water could be turned into ice at all. Some even saw flowers and green plants growing naturally there instead. This actually was a spontaneous sign of a certain type of great Tantric achievement. Although he would have liked to continue living the remainder of his life in solitary retreat, he was persuaded by his students to leave his external retreat and come out into the world to teach and benefit beings who were desperately in need. Moreover, there was political instability and danger of attack upon those masters and monasteries in Tibet during the late 50’s. Consequently, he was forced to leave his retreat and go down eventually to India with the 11th Gyalwang Drukpa, Gelek Palsangpo, with several other holy masters and attendants.

Lama Wangdor, who is now a genuine master of meditation and active in benefiting beings through his skills of direct instruction, was one of those who served my guru immensely on their difficult journey. Lama Wangdor is a great example of a genuine practitioner with devotion and realisation. Ordinary people, even youngsters with nothing on their back, did have great hardship to cross certain bridges made out of a single tree log, tens of metres high. If one falls off, there is not much hope to survive. Many died on their way with all sorts of hardship but Lama carried my guru on his back all the way to India with a pure heart. My guru’s relative body is not at all a small size, much bigger than Lama himself, about 5 feet 8 inches tall.

Lama told me recently that it was one of the great achievements in his life to be able to serve his guru in this way. He was the one who gave us the privilege of having our guru remain with us. Moreover, due to all the compassionate efforts of these masters, not only did Thuksey Rinpoche and them make themselves available for us, but also managed to bring out from Tibet some of the precious relics and ritual adornments of the Drukpa Lineage such as the Six Ornaments of Naropa. Finally, they secured rest in a refugee camp call Buxa in West Bengal, where the 11th Gyalwang Drukpa passed away the following year at the age of twenty-nine. Thereafter, my guru was entrusted with the duty of resettling the Drukpa order as refugees in the middle of nowhere, and of looking for the reincarnation of the 11th Drukpa. The amount of effort that he put into rebuilding, not only the external constructions but the inner constructions of people’s discipline, is really something beyond our imagination. If one does not have their base in profound compassion, one will never ever be able to carry out this kind of responsibility. 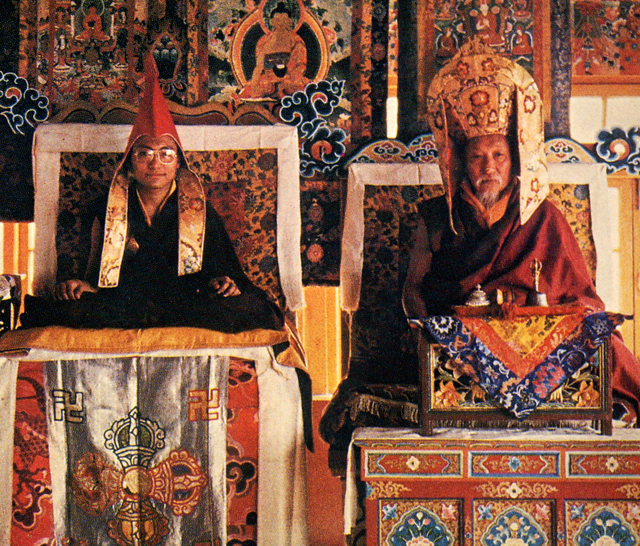 After the discovery and enthronement of the 12th Gyalwang Drukpa – that is me! – as the reincarnation of his father, guru, or whatever complicated way you would like to put it, my guru dedicated the remainder of his life to nurturing and taking care of me, not only in the spiritual sense, but also in the sense of a pleasing administration and precise beneficence of mundane achievement. In early 1970, he built our existing temple, along with the entire east wing of our monastery. Before that, he nurtured many poor people and monks by feeding, educating and accommodating them for many years. When the monastery was under construction, those monks at that time served my guru doing laborious work tirelessly throughout the period of construction, which lasted more than ten years. I am very proud of them that they could manage to serve their guru unconditionally, almost like the way Milarepa did. Other than those monks, we did not have much human support. Our real support came from non-human sources. When we needed building materials they miraculously appeared. Building stones just came to be near the monastery when lightning struck the mountain and caused an avalanche. We only had to pick it all up. We did a good turn for the local government at the same time! In the same way, sand was provided easily. Water was created by natural spring and rainfall whenever we need, and to this day we also have water flowing from a perpetual spring. I know that all of these things happened due to his divine power. So I would say we had more help from our protectors and divine beings then those mundane local human beings for the construction of the current Druk Sanga Choeling Monastery. Nowadays, people call it Dali Gonpa, whose name is derived from the name of the location where the monastery is situated. Apart from teachings and divine activities in India and the Himalayan region, my guru visited Europe and established three Drukpa chapters in France In 1981. 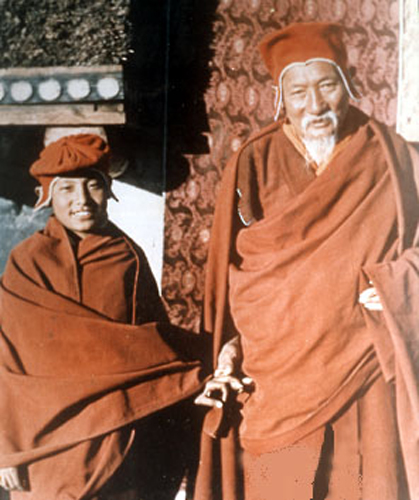 After saving and preserving both me and my lineage for years of crucial transition time, on 18th March 1983, my guru temporarily left me and all of us alone in this world to carry on our duty to serve beings. Though it is very sad and a great loss for this world, I took it as a final silent teaching. His love and blessings are always with us and all my activities are entirely blessed manifestations of entirely blessed manifestations of Thuksey Rinpoche, who permanently radiates the rays of the Dharmakaya. The rays of the Dharmakaya or one of his nirmnakaya form in human appearance has again come rapidly to help all of us and continue compassionate activities for the sake of all beings. The Buddha said, “The compassion of a great master will never cease until the cessation of the whole universe.” It is really an amazing thing to learn these secrets of the compassionate masters.ecrets of the compassionate masters.