His Holiness The Dalai Lama 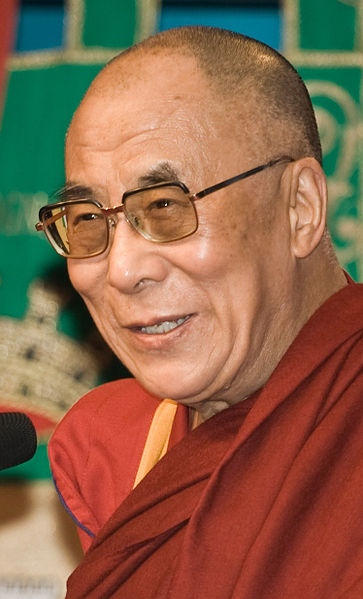 His Holiness The Dalai Lama discovered me when I was about 3 years old. Ever since then, he has been my main inspiration in mundane as well as spiritual life. Whenever I have some difficulties in dealing with day to day life, be it spiritual or worldly, nothing is needed except to remember him and his aspiring activities. I am not the only one saying this or feeling this way, everyone says the same about His Holiness. One of my friends who works for His Holiness’s office told me once that if there is any problem to be sorted out, especially something that is impossible to be sorted out, the only thing they have to do is to go and see His Holiness at his office, and a solution will be given in a minute or two. I am sure they can believe that it is His Holiness’s great blessings that help to resolve all the impossible issues, because they are physically in contact with him. For people like me who don’t have the opportunities to see His Holiness often enough, if we can remember him, all the seemingly impossible tasks can be sorted out by thinking of him. I think it’s supposed to be like this with all the enlightened gurus if you have firm and pure devotion and understanding about the overall guru-disciple relationship.

Even though I can’t remember very well my first meeting with His Holiness, because I was only 3 years old, I could still recall the moment when I went to have my hair cut by him at his residence as a part of a series of traditional rites. I was talking with him and having a relaxed and good time. I don’t remember exactly the subjects we were talking about, the only thing I can remember is that he was asking me a lot of questions and I answered relaxedly. Lately, I was told that Holiness was very surprised that I was so relaxed in front of him, because not many baby reincarnations were able to relax with him, many were afraid and most ended up crying. This actually gave me a great feeling of accomplishment that I myself and my lineage have a direct spiritual and devotional connection with His Holiness, not only in this and previous lives but also in lives to come. Ever since then up until now, I have been nourished by His Holiness’s presence in terms of spiritual growth and confidence. Of course, it goes without saying that, we all the Tibetans have been equally nourished by him.

Once I was at the driver’s license renewal office, the officers didn’t want to see me because I was dressed in our kind of robes. Before saying any words, they asked me, “Why are you in such a strange outfit? Please go back now and come back some time next week.” This actually means “Get lost”. Then some foreign ladies asked me, “Are you Dalai Lama?” Maybe her English wasn’t that good and they meant to ask, “Are you a follower of Dalai Lama?” I replied, “Yes, I am His Holiness Dalai Lama’s follower.” We started chit chatting in the waiting room mainly about His Holiness. All of a sudden, one officer from the same group who gave me some problems just awhile ago came and asked me politely, “What can I do for you?” And then within a second, my license was renewed. This is one of the fresh examples that I can share with you. The incident also tells us how weak the Buddhists and especially the Tibetan Buddhists are, because when others see somebody in robes, naturally the sense to give difficulties arises, maybe because of what has recently happened in India with some monks in robes that all others in the maroon robes have to suffer as a consequence. However, we are fortunate that His Holiness is the saviour for us.

I had a monk friend who also had similar experience having difficulties when he was wearing monk’s robes. My Guru always stresses on ethics, one of them is the dress ethic, in that monks must be in proper robes. But my monk friend disagreed and always said, “We should only be wearing robes when we are in the monastery. When we go out, we should be in lay clothes, otherwise we would have a lot of obstacles in doing everything.” I didn’t believe him and thought it was just an excuse for him to have good fun of dressing up in different clothes and doing all sorts of things that the monastery would not have allowed him to do. After my own bad experience, I feel that he has a point. Not only my own experience, a lot of holy looking sannyasins, sadhus and practitioners, who roam around in the market or streets, everyone runs away from them as if they carry some contagious diseases, that is very commonly seen. This is quite sad. The consequence of this is that the interest in spirituality will diminish. Then of course, nobody would want to practise, because there is no point and there is no encouragement from the world. Therefore, we all should work collectively, not only among Buddhists, but also among all the spiritual beliefs, hand in hand, we should find a solution so that we can all keep the spirituality for the benefit of all beings. If somebody asks me, I would say that people from all the spiritual beliefs should be working together, through finding our common interests and building a harmonious way of transforming ourselves into better forms, so that the whole world will respect us more. But don’t ask me for a solution other than this. As His Holiness also stresses about universal harmony in many interfaiths conference, we should follow his footsteps.

His Holiness is always very fresh and energetic. One of the amazing things for me is that he is always upbeat about everything and especially about helping others, no matter how difficult the hardships he himself has to go through for the sake of Tibetans and all sentient beings as a great Bodhisattva. This can only be done by a real hero like him, who is able to put the interest of the entire universe before his own. For us, if we have minor problems and have no solutions to get rid of them, we may end up committing suicide, just because of selfishness and being caught up with anger, pride and jealousy and all the afflictive emotions.

I don’t know where I heard this from, but I can clearly recall about 15 years ago His Holiness said in the public that he had completed millions of millions Mani mantras ever since he came out of Tibet, and when he asked others how many they had accomplished, no one could give him any satisfactory answer. People like us who have a lot of free time cannot even finish half a million and yet His Holiness who has to take care of the well being of all sentient beings (not only just praying but also on the practical level) is able to keep his commitment for personal practice in benefit of all beings. I myself have also committed 100 million Mani Mantra, after that 100 million Amitabha Mantra, followed by 100 million Guru Rinpoche Mantra, but I never managed, so I wonder when my fortune will come allowing me to finish all this. It doesn’t mean that His Holiness has 26 or 27 hours in a day. This tells us how divine he is.

Well, I am not going to take much of your time, telling endless inspiring experiences that I have received from His Holiness as showers of blessing because firstly he is well-known worldwide, and secondly, it is going to sound as if I am egoistically trying to use His Holiness to market myself, which definitely is the case with many people. One of the saddest things that we always come across, even in Tibetan society, is that people don’t see and appreciate the real and authentic qualities of His Holiness, and they just use him to promote themselves either for their spiritual status, political reputation or their material gain. That is something that I can’t bear. This is the reason why I have been struggling for many years within myself whether to list him down as my gurus in my website or not. But then just a while ago when I refreshed my website, I discovered that 3 of my living gurus (the other two being my own uncle and my father) are not listed as my gurus, this make me feel very awkward. I feel that I have to be fair, as I have to live up to my reputation as “Mr Fair”.

If you want to know more about His Holiness, as you all know you just need to make a search on the web, and you will find millions of information about his heroic activities.