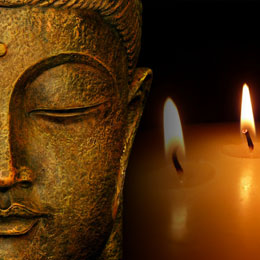 The king of Ladakh, Trinlay Namgyal, considered to be one of the last surviving Dharma kings or Chogyal, has left us a few weeks ago. As I said before the King and those genuinely belonging to his family are really the manifestation of Bodhisattvas, as predicted by Guru Padmasambhava. All the Kings of Ladakh are considered as the descendents of Dharma King Trisong Deutsan, respected as the Manjushri or the Great Wisdom Bodhisattva, and fully blessed by Avalokiteshvara. I was informed that after cremation, the king’s skull remained in tact and there was mantra on his skull. Although I haven’t seen these miracles with my own eyes, I am definitely not surprised.

Some people feel that this is a sort of superstition. They even think that we are a bunch of crazy people who encourage superstitious things to make others believe in us. So these people do not believe that humans have the ability to read mind, tell future and walk through the walls, walk in the sky, they think that all these strange things are ridiculous and irrational, just because they themselves cannot do it. In fact I believe that all these things are not superstitions, these are all our primodial abilities. Superstition, to me, is something that is not provable and yet we have to believe. Anything that falls under this category is what I would call “superstition”. Something that we can see with our eyes and we can prove, I won’t say that this is supersitition, this is in fact a reality.

Recently a friend asked me a very interesting question: “If there are other forms of living beings such as ET, then does Buddha exist?” As I always say, Buddha is the perfect enlightened being. Buddhahood is the perfect state of enlightenment. All the beings in this universe have the potentials to be enlightened, whether they are from earth or from other planets. That means ET can also be enlightened. Ants can be enlightened. This is why I said that I wish I’m not a Buddhist a few days ago. Self-labelling is giving us restrictions to think that only us the Buddhists can attain enlightenment. Buddha got enlightened not because he was a Buddhist, but because he realised the TRUTH. Enlightenment is beyond religion and beyond our mundane understanding. That’s the reason I said I wish I am not a Buddhist, because it becomes a restriction to go beyond who I am or who people think I am. There were some strange messages coming to my offices saying that I have disclaimed myself to be Buddhist and that I have to stop writing nonsense on my web. In that case, should I be writing more about the texts or should I be commenting on the various holy texts? Anyway, this is my web, I think I should be given the liberty to share whatever I think.

Firstly, what is Dharma? Dharma is the universal truth, it is not the Truth belonging to Buddhism only, but the Truth belonging to the universe. Since people are so attached to the idea that Dharma is only a Buddhist term, I would rather call it universal spirituality, which means it is something that can be understood and practised by anyone. Why are people getting into arguments and angry discussions? I think it is mainly because we are always making ourselves superior from others and that we always think that we are right and others are wrong.

We judge others so much that we always forget to look at ourselves. This is very sad and extremely unfortunate, because we lack the sense of spiritual understanding that all beings have the equal rights to be enlightened. Sufferings, enlightenment and spirituality have no gender and no religious labels. We are making our lives difficult and creating veils to block our understanding. We have built mountains of misunderstanding, therefore we cannot receive the univesal message of love, compassion, kindness and wisdom, and because of this, we have no hope to be enlightened. I do not think that the Buddha’s teachings are religious or restricted to Buddh”ism”. Until we stop labelling ourselves and others, until we stop judging and until we develop a mirror to see our own nature, we will not get any reception. We are just wasting our life and our time, criticising others and making ourselves miserable.

The Buddha said, “If you see me as a Buddha, you are not seeing Buddha. If you hear my teaching as the Dharma, you are not hearing Dharma.” Maybe I should contribute my share, “If you think you are a Buddhist, you are not Buddhist.” My best wishes to all you, may you all be happy and finally attain that true and universal enlightenment through the practice of true love, understanding, respect, appreciation, compassion and wisdom!