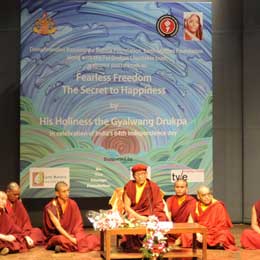 For many years, many people and organisations have requested me to give public talks in New Delhi and other parts of India, my birthplace, besides teaching in the Himalayas and in foreign countries, I didn’t feel that the karma or the right conditions were there, until recently. Conditions are very important for the ripening of positive or negative karma. We always talk about karma and forget about conditions. I would always put conditions as a little more important because we need conditions for karma to act. For example if we plant some seeds of fruit trees in unsuitable places, that means unsuitable conditions, then the seeds will never grow. So I feel for me, though I can’t speak for anyone else, these conditions have ripened for my karma to teach in New Delhi and other parts of my motherland.

I want to thank the 3As for making this happen, Archana, Abhishek and Arjun, thank you! For some reasons, I have given so many public talks everywhere, except in non-Himalayan part of India. This is a good beginning. It wouldn’t be so good if I felt that the vibes were not good, then it would be quite sad.

As usual, I am trying to open the door to those people who have very little ways of opening doors to their own happiness of life. Though I don’t think we Indians need that much of encouragement, because we were born with the keys to the doors, thanks to Indian rich culture that has been pouring in by sublime lineages of different spiritual beliefs. I can even say that I am filled with Indian spirituality, not only in this life, but lives that I went through, ever since Naropa’s time, if I may daringly say, so much so that I have confidence and I can raise my voice about that. But I can see there is a risk to lose that spiritual “juice” from our life, therefore it is very much needed to remind the youngsters, our future. This is what I really want to do. If I am given a chance, I will be happily contributing.

I have obviously been giving talks in Ladakh, Lahaul, Kinnaur and also in Sikkim, Darjeeling, all these Himalayan regions a lot, but in our Himalayan languages. I have not been finding the right opportunity to talk in a city like Delhi, which is more needed, because city life is full of distractions and challenges. Therefore city boys and girls need spiritual reminders more than those living in the Himalayas or mountains. I am only saying boys and girls, because elderly people have lived their lives, whether good or bad, they have passed their time. We have to think of the future of our country, the world, so young people are our hope for the future. I was very happy that many young Ladakhi students studying in Delhi came for the talk. I wished we could give them more tickets.

During the talk, I met a very interesting gentleman. He has very special hands. When we shook hands, I could feel his genuine sincerity and some sort of blessing, even though I did’t know then what role he was playing for the society. After that, I came to know that he is a very prominent and experienced politician, Dr Balram Jakhar, the longest serving governor of India. He has been doing good at diplomatic and society levels. No wonder there was a kind of positive energy that I felt. That was good.

Although it was one of the smallest crowds that I have ever had for my public teachings in the world, but the gathering had very good vibes. Good questions were asked. Too bad not much time was given that evening. That means, that we have to do this many times. As I said in teaching, since my birthplace is India, my favourite city is New Delhi, I feel that much connected and with the idea givng public talk in Delhi is very good move in terms of contributing to my own country. I look forward to meeting all of you again and again in Delhi and many other places! 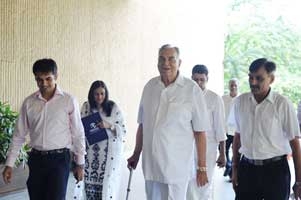 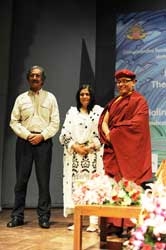 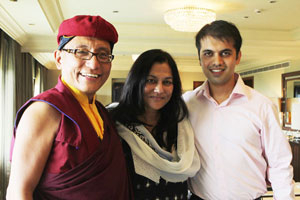